Strings are at the very foundation of much butoh practice due to the motif of being moved by something (like a puppet master).

Strings can be thought of both in the literal and figurative sense. A string can literally move you, but any qualia/image world/spirit can also serve as the puppet master that attaches strings to somebody.

Move as if a string is pulling any various part of the body. You can also change the amount of strings. These strings will move you in one direction depending on where the string is. This type of movement is actually an illusion because no movement can travel completely straight. There is only the appearance of being straight.

Attach one string to any part of the body and keep the string taut with the body. Something or someone then suddenly cuts the string. React accordingly.

While approaching the other end of the room, point upstage left, downstage right, downstage left, and upstage right. Pay attention to the transitions. Build up the speed. Then do the same exercise while pointing in the directions you choose. Do not forget about above and under. Experiment with how far your body follows the pointing. Much like in butoh strings, you can also butoh point. Butoh pointing has the same premise as the butoh string in that the directions go somewhere but are nonlinear. You can choose between you doing the pointing or a string attached to your finger that is making you point. Use of reduction & regeneration is recommended.

This is an expansion of the first exercise. Now the rest of the body can point. Not only can the obvious things point such as the elbow, feet, knees, lips, eyes, and top of head, but anywhere in the body.

This is a floor exercise composed of finding lines in the actual body to contact on the floor. For instance, I may draw a real or imaginary line that spans from the underside of my arm, cutting across my chest and winding up on the upper-side of my other arm. This will be the pathway that the body will draw on the floor.

Exercise 5: Source and/or Higher Self Strings

We move as if we were controlled by our higher self, guardian angels, ancestors, or even Source/God as if they were the puppet masters.

This is a very subtle shift in the paradigm of movement itself. On one end, one has the notion that one is doing the moving (such as keeping an arm raised), yet on the other end is the notion that one is not doing this movement. Can we feel the transition from one point to another. Can we gradually go from feeling (the energy used) in being the mover into the extreme other end of not being the mover at all (a puppet)?

This type of movement is the movement of nature. Like the linear string, you are also being pulled, but you feel the endless breaks of linearity. There is a general direction, but getting there is nonlinear. First play with subtle non-linear strings, where the linear deviation is very minimal, then expand the size.

Exercise 2: Dizzy Point A to B (Intermediate/Advanced)

Spin around for 1 minute to 5 minutes. Then the following are ways to go about walking after each spin:

Exercise 3: Dizzy Point A to B Gradient/Synthesizer Knob (Advanced)

We can form a gradient with the degree of line to non-linearity/drunk/dizzy after a spin. One can think of a synthesizer button. At one end is a straight line (sheer will power after a spin) and the other extreme is being completely taken by the dizziness and where it takes you. This gradient can shift.

This is a Noguchi Taiso inspired exercise. The concept involves putting into a square any rounding or figure-8 movement done in the body, so the body goes into linear directions. The rest of the body has to follow in the passive Noguchi Taiso water dynamic way.

In terms of contemporary metaphor theory, strings fit the image schema of FORCE. Image schemas to Lakoff and Johnson are “recurrent patterns in perceptual-motor experience that derive from our bodily interaction with the physical world.”¹ According to SIL International Glossary of Linguistic terms, a force schema entails a force that is “physically or metaphorically stopped or redirected by an obstacle.” They include the following elements:²

A sub-image schema of force that fits very nicely with strings is ATTRACTION. To SIL, an attraction image schema “is a force schema in which an object exerts a force on another object, either physically or metaphorically, to pull it toward itself.” Examples include: (1) magnetism; (2) vaccum cleaner; (3) gravity; (4) romance; (5) desire.³

Like so many other image schemas, we are bombarded with this schema at all moments of our lives. 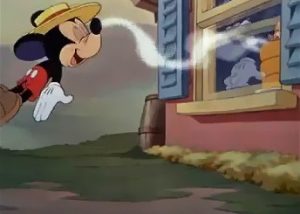 Outside of strings, what else can move you from point A to point B? It can be endless:

¹ Johnson, Mark (1987). The Body in the Mind: The Bodily Basis of Meaning, Imagination, and Reason, University of Chicago.

8 Ashikawa, Yoko. Translator unknown. Retrieved by Rhizome Lee with a note that it came from a workshop. Date retrieved: 10/22/2018 at the Subbody Butoh School in Dharamsala, India.

The following are subtle movements that can be added to the body at any moment. These movements can create the process of entering into a world or character and can also surface out of unconsciously-driven spontaneous movement.